After fathering three boys, digger company boss Scott Hardwick is so ecstatic at the prospect of finally becoming a dad to a baby girl that he has added a pink JCB mini excavator to his fleet. 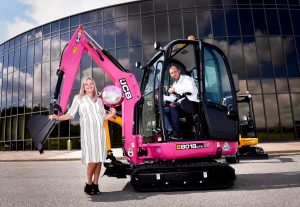 Scott Hardwick, 33, who owns Barnsley-based Hardwick Plant Limited has splashed out thousands of pounds on the new 1.8 tonne mini digger to mark the impending birth in October. Scans show that the baby is a girl and Scott and his partner and mum-to-be Cheryl Woollands, 25, wanted to celebrate her arrival in style. She is due on October 20 and will be called Rosie.

Scott said: “I’ve got three lads already – Rhuben, 6, Charlie, 4, and Oliver, 2 – so I was very happy when I learned I was also getting a daughter – it’s a lovely feeling. Given the business I am in, a pink mini JCB is really good way to celebrate a baby daughter coming on to the scene and obviously it’s a very appropriate colour for a girl.”

Scott approached his local JCB dealer T.C. Harrison, based in Chapeltown, Sheffield and put in the unusual request for the pink digger. The JCB 8018 excavator – which is valued at £22,700 – was then manufactured at the JCB Compact Products factory in Cheadle, Staffs.

This is the ninth JCB 8018 that Scott has bought through T.C. Harrison JCB – the others being in traditional yellow and black livery. And he has just placed another order for eight more, which will be delivered to his plant hire company on a monthly basis between now and next spring.

He added: “JCB mini excavators always go down well with utility companies for use on gas, water or electricity projects. I always get great after sales service from T.C. Harrison JCB and that’s what makes JCB stand out from the crowd and why I keep coming back with new orders.”

Non-executive director at Speedy steps down

STIHL Steps Up for SALTEX 2016 With New Powerful Pro Products