JCB was honoured yesterday for innovation and exports sales growth with three Queen’s Awards for Enterprise. 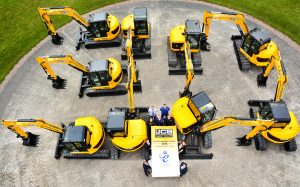 Winning it’s first Queen’s Awards is PCB Power Systems, producer of the engine which powered the JCB Dieselmax streamliner to a world diesel land speed record of 350.092mph on the world-famous Bonneville Salt Flats, Utah, USA, a decade ago and still remians unbroken.

The company, based in Foston, Derbyshire wins the Queen’s Award for Innovation for the development of its Ecomax family of engines. Fitted with a novel combustion system using new technnology and sophisticated computer control to meet new global emissions legislation, the innovative feature cuts fuel consumption by 110% and eliminates the need for after-treatment.

JCB originally began producing engines in 2004 to power its own machines and today more than 70% of all the company’s products are fitted with the JCB engine. The success of the engine is so great that other companies around the world now buy it and overseas sales grew by more than 325% between 2012 and 2014 – earning JCB Power Systems a second Queen’s Award, this time for International Trade. 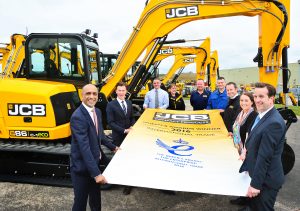 Completing the Queen’s Awards hat-trick for the JCB Group is Cheadle, Staffordshire-based JCB Compact Products, manufacturer of compact construction equipment including micro, mini and midi excavators. In the face of fierce global competition, overseas sales of JCB Compact Products’ machines grew by 25% from 2013 to 2015 – earning the business a Queen’s Award for International Trade.

The three accolades mean that JCB cements its position as the UK record holder of Queen’s Awards – winning a total of 30 since its first in 1969. 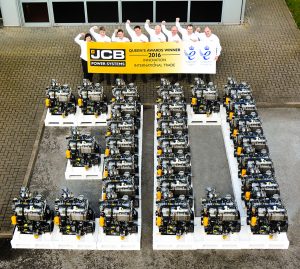 JCB Chairman Lord Bamford said today: “Product innovation is what drives JCB’s success, so we are particularly thrilled that the JCB engine has won a Queen’s Award for Innovation. In the 12 years since manufacturing began, JCB has produced more than 350,000 of its own engines, secured a diesel land speed record and developed a great British business which employs more than 250 people, so winning Queen’s Awards marking our achievements is the icing on the cake.

“For JCB Compact Products to win a Queen’s Award for increasing exports is a tremendous achievement because the company operates in a fiercely competitive market, particularly in the mini excavator sector where there are more than 30 different global manufacturers.”

Established in 1999, JCB Compact Products Ltd, designs and manufactures a range of compact construction equipment including micro, mini and midi excavators from 0.8 to 10 tonnes, which sell in large volumes around the world. The mini digger sector business worth more than £4 billion worldwide and the company’s machines are sold in more than 100 countries.

External sales have grown rapidly and last year almost a quarter of the engines produced by JCB were for external customers. These engines are working in a wide range of different machines and in environments varying from harsh desert to extreme arctic conditions.

The latest Ecomax family of engines is unique amongst its competitors in that the new and innovative combustion process prevents the creation of emissions in the first place, rather than eliminating them later using after treatment such as a catalyst or a filter. Since 2010 JCB has saved customers more than one billion litres of fuel through the introduction of more efficient machine operating systems and the innovative Ecomax engine has been a major contributor to this saving.

Do More With BoSS